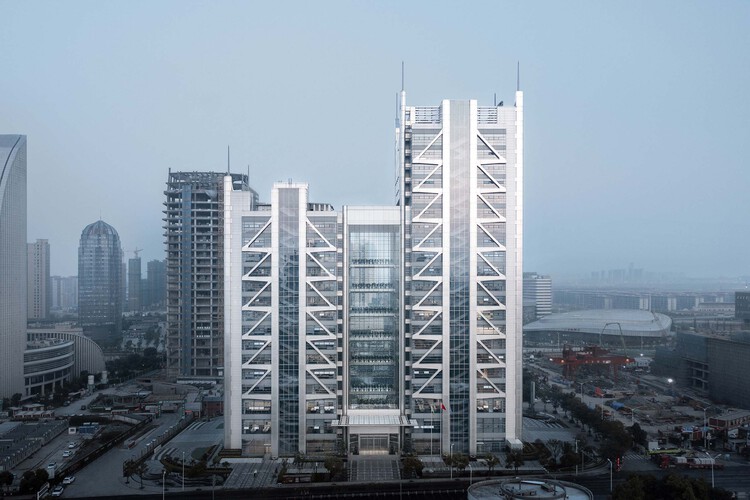 Text description provided by the architects. In terms of function, contemporary buildings in comparison with those in the past are often faced with a higher level of uncertainties. Within the life cycle of a building, the potential for change of function and pattern of use have become the new normal state. Through a systematic approach, the Exo Towers integrates the spatial layout, structural form, building envelop and mechanical services into a whole , creating a forward-looking and universal space framework which facilitates a building with a higher degree of flexibility and adaptability.
——Yongzheng Li, Co-founder of UUA / Lead Architect

Background. Located in the central position of Jinghu New District, Shaoxing, Zhejiang Province, the Exo Towers are comprised of two towers, being 15 and 21-story high respectively, and linked together by a 70m-high central glazed atrium.

The building utilizes an external structural system that greatly reduces the number of structure columns of the typical floor, creating large and open office space, allowing for the ongoing flexible division of functional layout in the future. The Exo Towers, therefore, derives its architectural language from the manner in which the space and structure are completely integrated.

Space and Structure. The building adopts a hybrid system of steel structure and concrete structure. The central concrete core and the external steel frame jointly constitute a supporting system. From the 4th floor of the building, the south tower and the north tower are composed of 2 and 3 repeated structural and spatial clusters, respectively. Each cluster includes 6 floors. The cluster on the south and north facades adopts a 4+2 mode and includes a pair of 4-story high external columns to support 4 typical floors. The load at the bottom of columns is transferred to the masts on both sides through a pair of 2-story high diagonal braces. The double-height communal space and outdoor terrace are arranged in the position corresponding to the brace. The cluster on the east and west facades adopts a 2+2+2 mode and is composed from top to bottom of 3 groups of symmetrical hangers dropped from diagonal suspension trusses, creating column-free corners within the office spaces and offering a sweeping panorama of the city.

Building Envelop and MEP Services. The details and quality of a building largely depend on the presence of the envelop and service terminals, in other words, how the two systems are harmoniously integrated into one seamless order. The cladding of the external structure, perhaps the most characteristic part of this project, adopts a linen pattern stainless steel plate, reflecting the surroundings and interacting with the light that changes throughout the day. Between the two towers, a 27-meter-wide glazed canopy with a 15-meter cantilever creates a dramatic entrance experience, leading to the 70m-high atrium.

The same design language is applied to the south and north entrances of the building, with a guiding entrance space being formed by a double-height glass curtain wall that retreats inwards. A cable-net glass curtain wall is used for the east facade of the atrium, creating extraordinary transparency and clarity by hiding the anchors and spring assemblies in an ingenious way. Six sky bridges span between the two towers on the west side of the atrium, structurally bearing the load of the glass curtain wall. Suspended from the atrium, the ceiling system filters sunlight gently, whereas, at night, it acts as atrium lighting. The maintenance catwalks of the ceiling system provide an access to clean the glass roof and ceiling panels or replace the luminaire.

Princess Anne to be awarded after 50 years of wildlife charity work - ‘An inspiration!’ | Royal | News

Is Diet Soda Really That Bad For You?

The benefits of a digitalised government finance platform